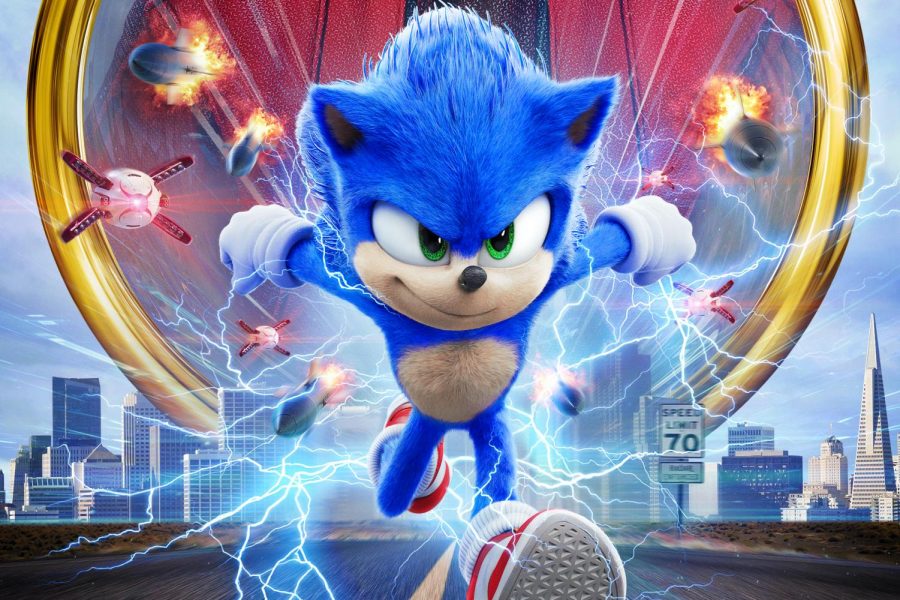 Looking for a fun adventure movie to take the family to see this Valentine’s day? I’d recommend going to your local theater to see Sonic The Hedgehog. Sonic The Hedgehog is a film adaptation of the popular Sega video game franchise.

Jim Carrey’s rambunctious performance as Dr. Robotnik is a whole lot of fun to watch; it pulls a lot of inspiration from similar roles in his past films such as The Mask and Ace Ventura: Pet Detective. His energetic style of acting elevates this movie’s humor beyond the standard comedy of a typical made-for-kids film. As fun as Carrey is, this is Sonic’s story.

Sonic is sent to earth to escape his enemies on his home planet, and he lives in a cave in the small rural town of Green Hills, Montana. At the start, Sonic is presented as bored and just wanting a friend to keep him company. The character of Sonic reflects the film’s target audience: children. He is immature, energetic, and (quite literally) bouncing off the walls. Sonic teams up with Tom Wachowski to escape Dr. Robotnik. The two embark on a cross country road trip in order to retrieve a lost item that is crucial to Sonic’s escape from earth.

Along the way, the chemistry between Tom and Sonic is showcased. It is super convincing and at times heartwarming. James Marsden does an excellent job acting with what is basically a talking CG image. The two develop a “father and son” type relationship as the film progresses, and it is very charming to see them act together in a way that feels real.

No movie is perfect: some of the pacing in the scenes is very odd, and it feels like they jump around locations so fast you can’t remember where they previously were. Sonic can be presented as annoying in a few scenes; he is a vessel for the childish jokes he makes. There is very in-your-face product placement of Olive Garden throughout the film, and most of the times it is more annoying and distracting than it is funny. But those flaws don’t completely sink this movie.

Overall, Sonic The Hedgehog is a super fun time at the theater and a great movie for the whole family to enjoy. The action is fun and the movie never feels completely slow or boring. Most of the jokes are very funny and the acting, especially Jim Carrey’s, is on point. 8/10