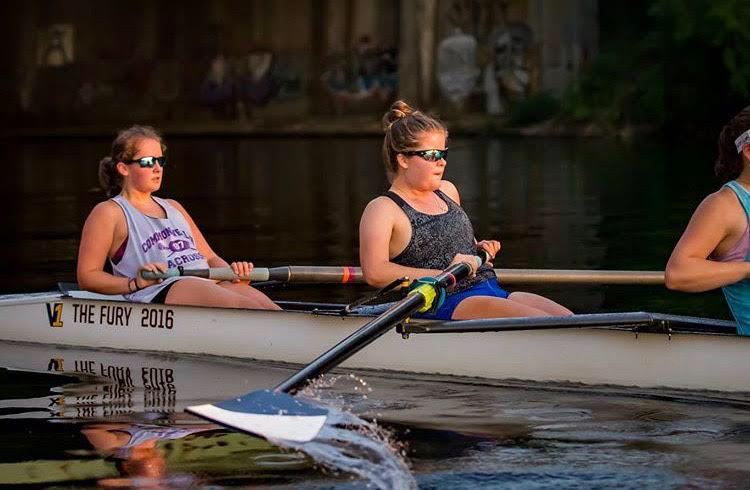 Kara Mammola is a senior at Westford Academy, and she rows at a competitive level. She has committed to continue rowing at the collegiate level for Stetson University.

Although she has not been rowing for a long time, she started in eighth grade, she has worked extremely hard and has improved greatly.

By sophomore year, she knew it was something she wanted to pursue beyond just a hobby.

“At the beginning, I was rowing because I wanted to push myself and exert my body to its full potential, but I quickly developed a love for the sport that will live on within me for the rest of my life,” Mammola said.

Mammola loves crew, but also credits it for teaching her so many things outside of the sport itself. She appreciates this because the things crew has taught her are not able to be learned in a normal classroom setting.

“Words cannot describe the amount of life skills, strength, and confidence that I have gained through rowing. In rowing, you must have the strongest mind on top of peak athletic ability.” Mammola said.

“Kara has demonstrated everything what I believe both the sport of rowing and WA athletics aspire to achieve she is a team player, very coachable and has always striven to improve both herself and those around her,” Coach Ian Coveny said.

Mammola strives for everyone to exceed. She wants the whole team to be successful. She knows that without her teammates help she would not have been able to excel like she has.

“Kara is hardworking and a dedicated teammate. She is the type of person you always want in your boat,” co-captain Bella Princi said.

Mammola, unlike a lot of other WA students, enjoyed the college process. For her, it was even fun. She was fortunate to be able to find a school so welcoming like Stetson was.

“From the moment that I stepped on campus, I knew that it was the school for me. As I stood on campus, it felt like a new home and the best place to begin my new journey.” Mammola said.

She also expressed, that in addition to the campus, she also was inspired by the athleticism and commitment at Stetson. Not only does she strive for athletic excellence, but she also continues to impress people with her academics. She plans on studying psychology and Spanish in college.

Mammola has also spent time with some of her future teammates. In the short time she has known them she has developed an unbreakable bond. This will be helpful in developing team chemistry quickly next fall.

“It was great meeting them… I’m excited to announce that they are my future teammates,” Mammola said.

Mammola has an extremely good support system. On signing day she stood in the front of a large forum of people. After she signed friends and family rushed to the front to get pictures. They wanted to show their support. Her sister, Ali Mammola, was one of them.

“I am so lucky to have grown up with such a good role model and amazing older sister. She is always there for me and I’m happy Kara earned her opportunity to row D1. I’m excited to watch and cheer her on,” Ali Mammola said.

In the fall, Mammola will start a whole new chapter in her life. Although she will be missed by the WA and crew community they know she will excel on whatever is next.

“Everyone should know that they need to follow their dreams. If you have something that you want, do not stop at anything to get after it. Be yourself, be confident, and believe in your abilities.” Mammola said.