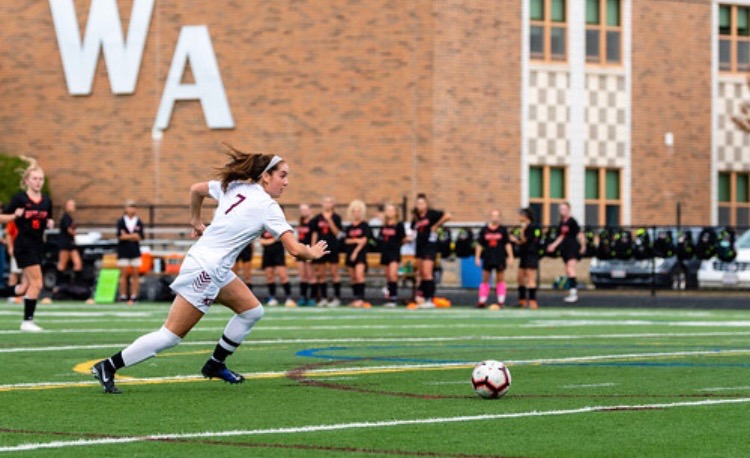 Ally Giovino has been a standout on the Westford Academy soccer team for years now.

She also reached a milestone many high school soccer players can only dream about; she scored 103 goals for WAGS.

“Ally just has this knack for putting the ball in the back of the net,” coach Katie Andjus said.

She also knows how to use her speed to her advantage.

“Whenever the ball comes to Ally’s feet her first thought is ‘how can I get by my defender and go towards the goal,” Andjus said.

Younger players also look up to Giovino, because she is able to give them first-hand experience and knows how to be a great leader and friend.

“Ally never fails to strive for excellence and she has taught me so much about soccer and being a true teammate on and off the field,” teammate Tamar Almasian said.

Her abilities have gone above and beyond what most would imagine.

“When she is double-teamed she does not let this bother her. She fights through all the defenders and still finds a way to get the ball into the goal,” Andjus said.

Besides just learning about the sport, soccer has taught Giovino so many things that she wouldn’t have learned in a classroom.  She has learned to work hard no matter what and to never give up, and she believes that these qualities are not only good for soccer but are also very useful to take into the real world.

Although she had always dreamed about playing D1 college soccer, she did not come to the realization that she could do it until middle school. She saw how successful she was playing. She was scoring goals and having so much fun doing it. When she realized her potential, she became more motivated to do her best on the field. At this point, she started taking soccer more seriously.

Giovino signed her letter of commitment to D1 college Colgate recently, but she knew where she was headed long before that. She verbally committed to Colgate in the fall of her junior year.

Giovino had enjoyed the college process in the beginning but the closer everything got the more stressful.

“Ever since I was a little kid it has always been my dream to go D1,” Giovino said.

Her dream has recently come true but not without hard work and dedication.

“Ally has always worked so hard on the field and has this strong desire to win no matter what,” Andjus said.

She has been to see Colgate a few times and it was love at first sight, she loved the idea of a strong academic school matched with an equally good D1 soccer program.

Although she is unaware of what she will be majoring in, she likes that Colgate does a great job setting up students with an easier merge into the working field than most other schools can provide.

She has also begun interacting with the girls she will be joining at Colgate next year and has enjoyed every minute of it. She has already begun to build everlasting bonds before she has even started.

“Ally has been a great leader for WAGS. She is kind, funny, positive, and just an overall great teammate,” Andjus said.

Giovino looks forward to her future “WA has been a great experience for me. In four years I’ve made connections with so many people. I appreciate that deeply and I’ll never forget them,” Giovino said.