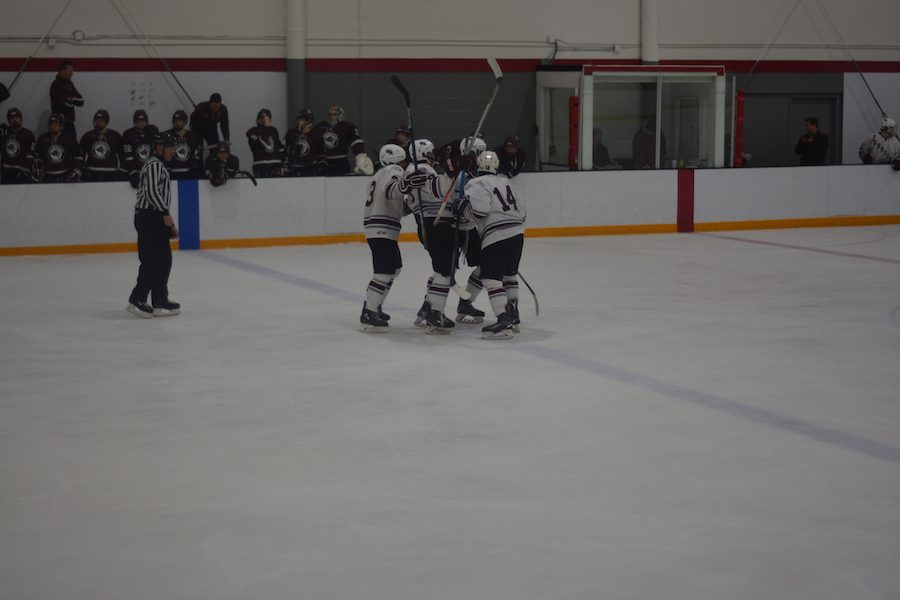 Ghosts celebrate after scoring on Chelmsford.

This season, Ryan McCarthy was the only freshman to make the Westford Academy Boys’ Varsity Hockey Team. McCarthy has been playing hockey since he was only three years old, and since then he has put in a lot of hard work to earn this position.

McCarthy had been looked at by the team before the season had even started, but the coaches were not yet sure how he would do against players that were three or four years older than him. Once McCarthy got the chance to play against his teammates in tryouts, the coaches knew that he would be a positive addition to the team.

“Ryan has very good hockey skills, but it’s his hockey sense, knowledge of the game, and his on-ice vision that are exceptional,” said Head Coach Bob Carpenter about what set McCarthy apart from the other players.

McCarthy proved to be a positive addition to the team not only on the ice, but as a teammate as well. Senior goalie Joseph Cornetta said that McCarthy was trying to get better every day and that he had really good relationships with his teammates.

On the ice, McCarthy had a very successful season. He managed to play on one of the top three lines all season long and he dressed for all of the games. McCarthy had also earned a good amount of playing time in games.

“It’s pretty cool and it’s been an experience. I almost died a few times,” said McCarthy about playing on the varsity team.

The pressures of playing on varsity for McCarthy included always playing to the best of his ability and continuing to develop as a player; otherwise, he could get benched or bumped down to the JV team.

McCarthy was able to play through these pressures and create strong bonds with his teammates to become one of the key contributors to the success of the team.

“As a teammate, Ryan has the respect of all of the players and staff. He is very hard working, very coachable and a really good person.  We know that Ryan is going to be a very key player and a leader for us over the next three years” said Carpenter.