WA Girl’s Basketball comes out on top at TD Garden 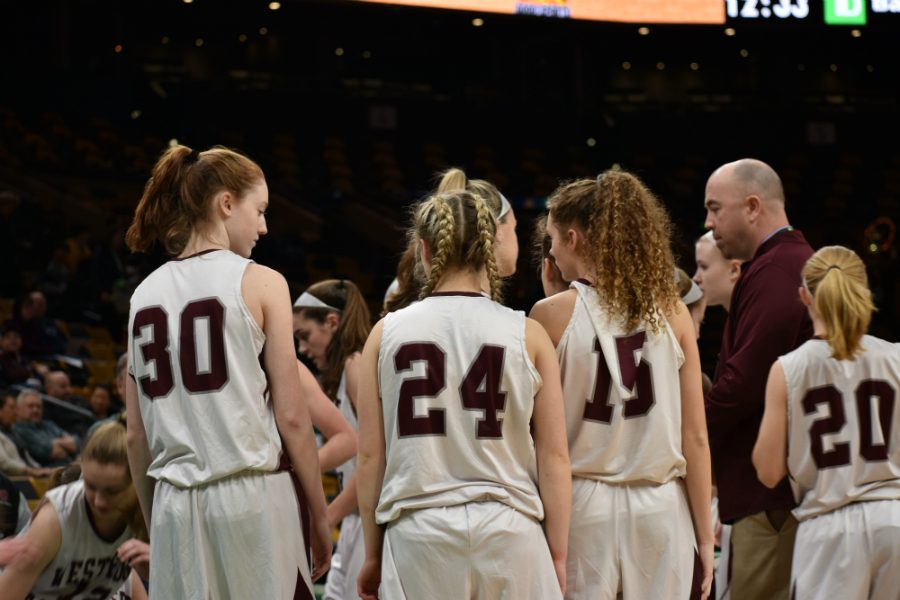 On January 6th, 2019, Westford Academy Girl’s Basketball faced off against Groton-Dunstable at TD Garden, beating them 60-55 in an intense game of back and forth.

Groton and WA opened the game strong, with the first quarter almost ending 7-7. However, in the last minute, Groton and WA played intense back and forth, with Groton beginning to solidify a lead over WA, leading 11-9.

WAGB did not allow that lead to last long, with Senior Captain Tess Keele rebounding the ball across the court at the top of the second quarter, ending in a shot for WA. Bouncing off of this, WA kept their moment strong with sophomore Jennifer Martin shooting a three-pointer and pulling WA ahead 20-17.

Martin’s three-pointer was immediately followed by more shots made by WA, most notably an impressive two-pointer by junior Claudia Oakleaf, which further the gap between WA and Groton, WA leading 24-17. Oakleaf continued to make an impressive second quarter, shooting another two-pointer and closing the first half with WA leading 28-19.

For the rest of the third quarter, WA continued to play back and forth with Groton. The quarter closed following freshman Kayley Carignan’s final basket of the quarter which pushed WA’s lead to 43-36.

WA did not slow down in the last quarter, shooting an additional six points before Groton could even come close to the basket. Groton quickly began making shots and getting past WA’s defense, looking to close in on WA’s lead, getting themselves to the point where there were only lagging around 7 points behind, even despite WA’s rapid shots.

Despite Groton’s pick up in speed, WA maintained a healthy lead of at least seven to eight points for the better part of the quarter. WA picked up points fast in the last few minutes of the fourth quarter, with Pillsbury making the last shot for WA, finalizing WA’s victory 60-55.