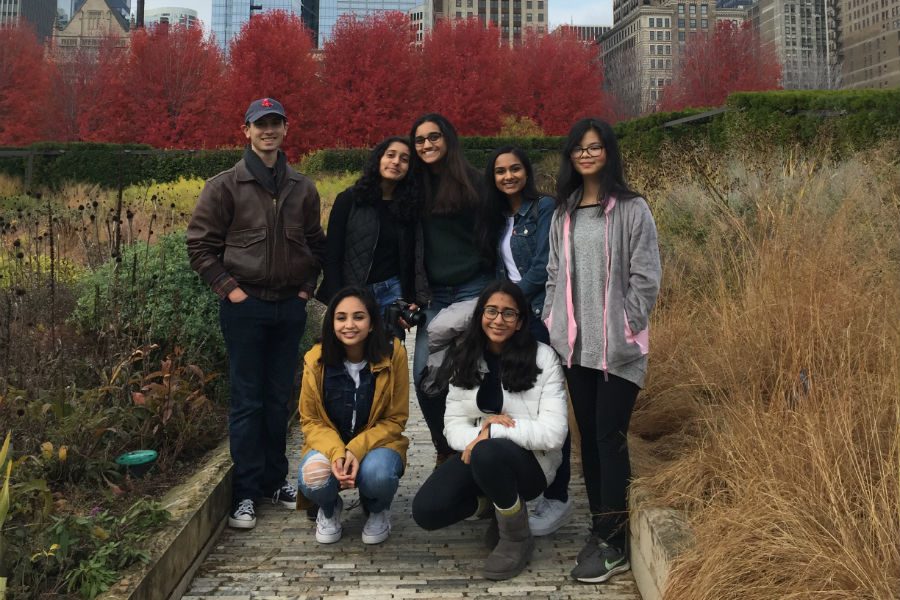 Seven of the Ghostwriter staff members went to Chicago from October 31 to November 3 to attend the National Scholastic Press Association (NSPA) Fall National High School Journalism Convention. The conference had professional journalists giving speeches, workshops, and presentations for high-school journalists from all over the country.

After spending a day touring Chicago, on November 1, the Ghostwriter staff, along with advisers Janet Fonden and Jack Holbrook, had the opportunity to learn and develop ideas at the pre-convention workshops. They learned important information about how to improve their photography, writing, and team building.

Senior Managing Editor Mehul Shrivastava, junior editor Mahi Kandage, and junior editor Kavya Desikan, went to a Team Storytelling workshop where they learned to use infoboxes and graphics. Varshini Ramanathan, a senior and the Editor-in-Chief, went to Digital Photography where she was taught tips about photography and went outside and do some photography exercises while she was at the workshop.

“I’ve been learning photography on my own for about a year now, but this really helped me fill in some holes in my learning which I had never got around to learning from the internet, and it also taught me how to teach photography, which I think is going to be very useful for helping out the Journalism 1 students and my junior editors in learning how to use the camera,” Ramanathan said.

Freshman staff writer Anushka Patil went to the Writers’ Workshop, along with junior editor John Vassiliou and freshman staff writer Hannah Thomas. This was Patil’s first time going to a NSPA convention. This workshop taught students how to write better headlines and how to interview people. She said it was fun because she got closer to the editors, heard another point of view about how to set up writing, and experienced what being a journalist felt like.

“[…] when we actually went to Chicago I actually saw the actual experiences of what real journalist had to do, like interview people on the streets and finding out information that hasn’t been given to us, so I thought that was pretty cool,” Patil said.

On that Thursday evening, keynote speaker Pete Souza spoke about his experience as a photographer working at the White House. Souza talked about how he did his job and how he became close to the people in the White House. He inspired students and some teared up from his speech.

Fonden said she was amazed and impressed by Pete Souza’s speech. Since last year, she has been taking note of his work in photojournalism.

“[…] I think he was a great photographer and he has done amazing work, like behind the scenes, of working with the president. A lot of photographers don’t get that kind of access so it’s really amazing” Fonden said.

On Friday morning, Kandage, Desikan, Ramanathan, and Shrivastava took a qualifier test for the Quiz Bowl competition, where high school students compete against others with topics such as current events, terminology, and history. They won sixth place out of 39 teams in the qualifier.

The Ghostwriter staff then went to write-off competitions. They had about two hours to hear a presentation and to write a specific article about a topic the judges gave them.

On Saturday, they went to compete in the Quiz  Bowl competition. They won at the beginning but lost the quarterfinals to Walnut Hills High School in Cincinnati, OH with the score of 7 to 10. The staff spent time with each other by walking around Chicago and went to visit a professional journalist from the New York Times, Monica Davey.

“[…] the big dreams which I always had for the paper can become a reality if we worked together,” Ramanathan said.