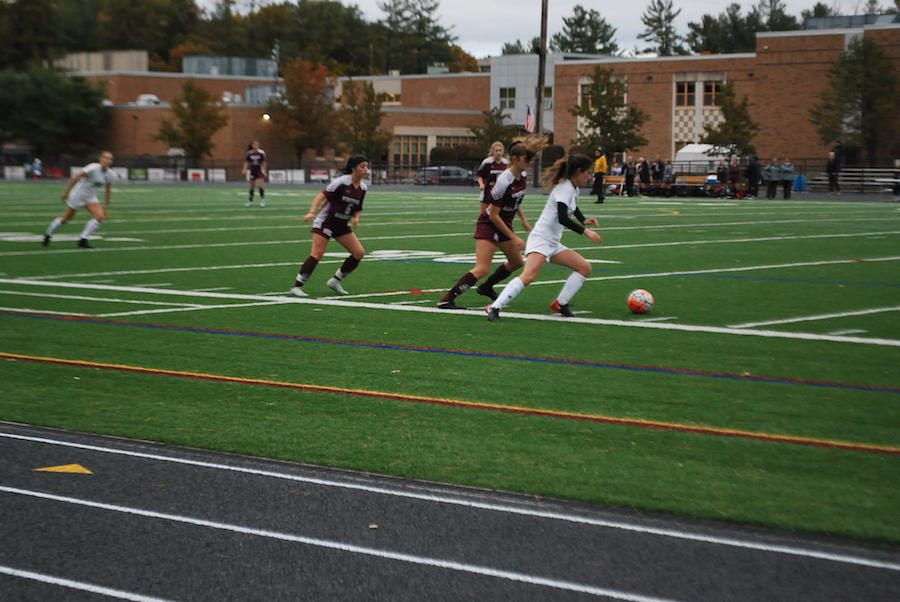 WA looks to block a pass

On October 29, Westford Academy Girls’ Soccer faced off against Cambridge Rindge & Latin for their last game of the regular season. The game, which was initially scheduled to be on October 4, resulted in Cambridge getting completely shut out by WA, losing 0-6.

WA previously sailed through a game with Cambridge on October 25th, winning 7-0.

WA played a strong offensive game, rushing the ball down the field at every opportunity. Junior Ally Giovino proved to be a star in this game, shooting four out of the six goals during the game.

Giovino shot three goals in the first half, as Cambridge struggled to keep up with the fast pace of WA’s offensive and their seamless passes.  The first half closed 3-0, with WA in the lead.

In the second half, Cambridge attempted more goals, however, they were consistently foiled by WA’s goalie, junior Mya Barber-Mingo. Senior captain Meline Almasian, junior Bella Hillman, and senior Caroline Sawrey worked cohesively together to make a seamless defense, clearing the ball before it could near Barber-Mingo.

Giovino continued to play strongly, making two more goals in the second half including a beautiful assist from freshman Isabel Doherty.

As the game progressed, it became clear that Cambridge’s defense was growing fatigued against WA’s powerhouse players, causing them to send it many alternates to the starting line. By the last twenty minutes, WA was relaxed, more focused on perfecting plays than beating out Cambridge.

“It was really just one of those games where we were trying to perfect some of the things we need to work on in order to be ready to go into the state tournament,” said Coach Katie Andjus.

The game ended 6-0 after senior Madison Barry shot the last goal on a rebound.

WA had a successful regular season, going 10-4-1, and now qualifies for state tournament.

“It’s always gonna be a tough road ahead because you face so many good teams, but we have been on the upswing and playing really well. We haven’t really lost a lot of games in the second half of the season. I think we’re all energized, we’re all gelling with each other, and I think it’s gonna be really positive if we keep this up,” said Coach Andjus, looking ahead to the state tournament.