New teacher on the block 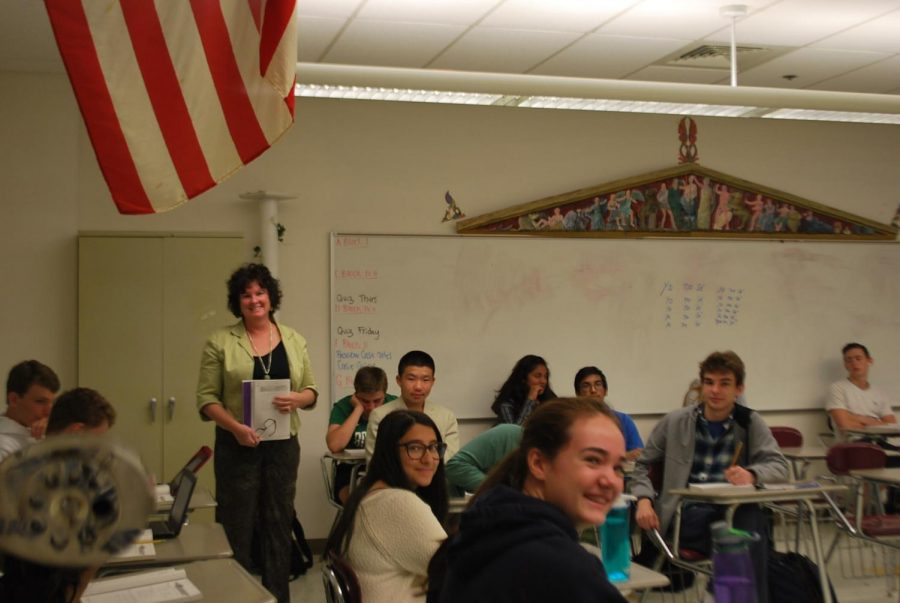 Question: What class are you teaching?

Q: Do you teach any honors?

Q: Do you have a favorite class that you teach?

A: No, not really. I like all of them for different reasons.

Q: Tell us about why you moved to Westford Academy.

A: Because it has a great reputation and I have a friend who lives nearby and his kids went through Westford Academy, and so I knew that this was a good school.

Q: How long have you been teaching?

Q: Where did you work previously?

Q: What universities did you teach at?

A: Rutgers, one of the Penn State campuses, Kutztown University, and Muhlenberg.

Q: How are you enjoying WA, so far?

A: So far, I love it. Everybody’s very nice and very helpful, which is wonderful. It’s kind of hectic, I’m not used to the frantic pace. I’m used to [the day] being longer and slower, which isn’t better, it’s just different. So, it just takes a little while for me to transition to what I consider a frantic pace, but the benefit is we’re not finished at two, but we can leave shortly after, so that’s very different for me.

Q: How did it differ, other than the pacing?

Q: How do you like the atmosphere here at WA?

A: I love it, it’s very energetic and everybody’s really nice, I love the diversity of students. I think it’s a great school.

Q: Where did you go to college?

Q: Tell me about what influenced you to go into foreign language.

A: I lived in Texas, and at that time, I was originally going to go into English, and then I just always really enjoyed Spanish. I was surrounded by Spanish speakers in Texas and I saw many more job opportunities for Spanish speakers in Texas. I’ve had a number of jobs outside of education where I used Spanish and I found it to be my foot in the door, actually because then and now Texas is a bilingual state and so I had all kinds of jobs because of Spanish. It got me in, which if I hadn’t had it I wouldn’t have gotten those jobs.

Q: Since you have children who have already graduated high school, what advice would you give your students?

A: I would say take advantage of all the opportunities you could possibly take advantage of. There are many, many, many different things to pursue and if you see something that you’re interested in, you should check it out. You may like it, you may not like it, you may love it, but at least you checked it out. It’s a good, safe time to check out things and pursue different avenues of interest.