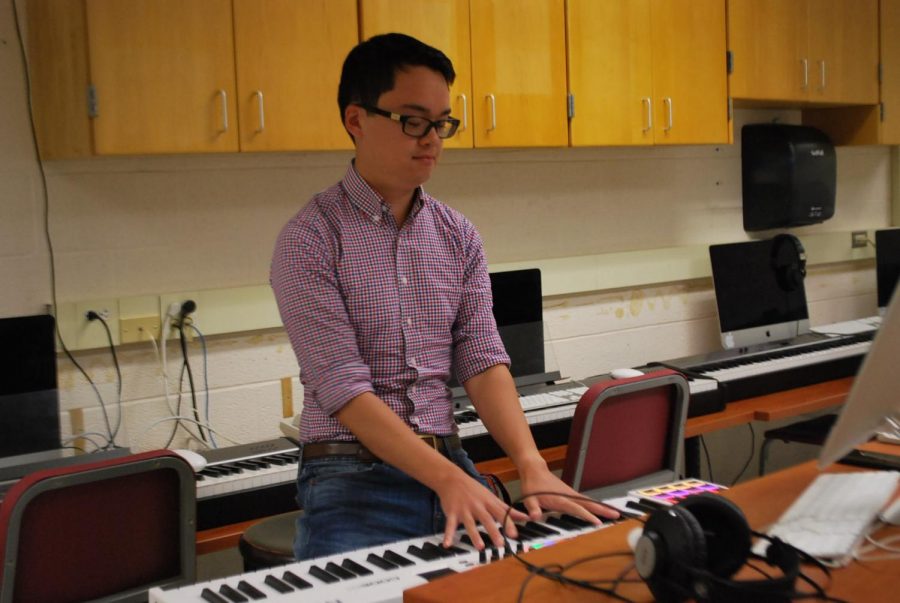 Soon after George Arsenault left Westford Academy at the end of the last academic year, Michael Soo came in to take his place as the school’s band director. After coming to Westford Academy as a student teacher in college, Soo is returning as an official member of the faculty. His brother, Mark Soo, works at WA as well as a biology teacher.

Principal James Antonelli took notice of Soo’s intelligence and enthusiasm during the selection process, and commended him for his eagerness to give the time and energy required to be a part of the music program

“We had a phenomenal interview with Mr. Soo, and liked him from ‘hello’ basically,” Antonelli said.

Soo student taught under Arsenault as a student for seven weeks, and looking back, he said the hardest part of the experience was leaving at the end of it. When he found out he was hired on June 22, he was very excited to come back to a familiar setting.

“It’s nice to know just about half of the students who I have in my classes,” Soo said.

After his experience shadowing Arsenault, Soo is looking to implement some of his strategies and techniques that he learned during that time into his own teaching, seeing that they both have similar views when it comes to teaching music.

“Emotional and intellectual well-being in the process of making music are very important to us,” Soo said.

Soo graduated the University of Massachusetts in Amherst with a degree in music education, and has taught for two years since then. Last year, he taught choir in West Boylston, but decided to return to Westford Academy as a band teacher, describing it as “coming back to [his] roots”.

“Chorus is great, the kids were wonderful. And chorus, I realized, was not for me,” Soo said.

Growing up, Soo built up an extensive background in both wind and percussion instruments, which he considers to be a strength in his teaching now. He started young, playing the piano, which he did not completely enjoy. He moved on to the clarinet, and finally switched to the French horn as per recommendation of his band teacher. The French horn continues to be his primary instrument. At the same time, he was also playing the drums, for which he has always retained a passion.

By the time Soo was fourteen, he knew that he wanted to pursue a music-related career.

At sixteen, Soo figured out that he preferred human interaction in his life rather than being confined to a practice room, which led to a career in music education.

Soo specializes in percussion and the French horn, but he is comfortable teaching all instruments, and he enjoys working with students of different interests and seeing their enthusiasm to both work hard and have a good time.

“It’s a method of expression that a lot of people come to, and being a part of their […] both emotional and intellectual journey is honestly the best part of the job,” Soo said.

Senior Eunice Pak finds it refreshing to have a teacher who orients himself around the goals of his students, and also admires his work ethic and sense of responsibility.

“My favorite thing about his classes is definitely how he directs his classes based on his students’ interests and goals. It’s kind of like he’s handing the steering wheel over to us, but he’s teaching us how to drive the car and all the fun things along the way,” Pak said.

Antonelli himself has gone into Soo’s classes multiple times this year to observe, and he always notices the positive energy Soo brings to the classroom and how students always seem to be engaged.

“It was just his enthusiasm, I mean it was palpable. You could tell he was one hundred percent in,” Antonelli said.

When he started teaching, Soo found the change from being a part of the ensemble to conducting it one that he had to get used to. He describes conducting as leading the ensemble rather than being a member of it, and placed emphasis on the necessity of communication both among the ensemble members and with the conductor.

“If I do my job well enough, the students won’t need me. I can just start them off, or they can start themselves, and they can just make music from there. But in the meantime, I’m up there helping them communicate their the way that they need to, making sure that they’re listening to each other across the ensemble,” Soo said.

Although teaching music is Soo’s passion, there are some setbacks that come with it. He described his biggest challenge as having one classroom with people of varying musical backgrounds.

“Making sure that everyone has a positive experience in such a setting is very important to me, and it’s also one of the biggest challenges, and at the same time, it’s one of the biggest rewards in job, just seeing everyone come together, and being able to make music,” Soo said.

Soo found the WA community as welcoming and helpful, and has particularly received a lot of guidance from both administration and music faculty. During his time at WA, Soo hopes to build healthy playing habits with his students so that they can eventually step out of their comfort zone with more advanced music.

“Phrasing something in a particular way, making something sound  the way that you personally want it to sound  [like] and taking risks in the classroom is really what music making is about,” Soo said.