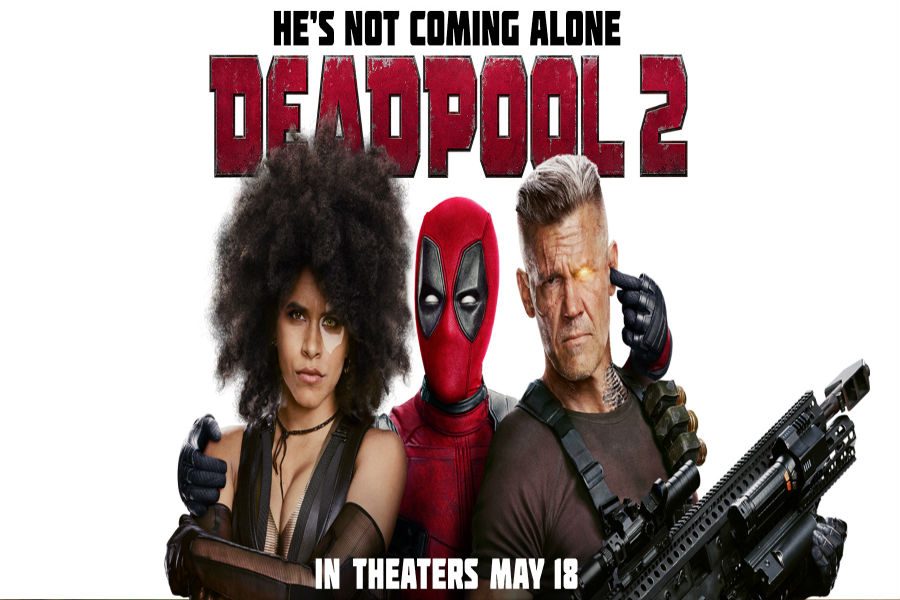 Deadpool 2, Twentieth Century Fox’s most recent production, is a darkly comical film. Directed by David Leitch and written by Rhett Reese, Paul Wernick, and Ryan Reynolds, Deadpool 2 is the sequel of the 2016 hit Deadpool. After suffering a heart-wrenching tragedy at the beginning of the film, Deadpool, whose real name is Wade Wilson (Ryan Reynolds), must overcome his pain while taking the audience along on a thrilling adventure.

After crossing paths with an angry, fire-wielding mutant teenager named Russell (Julian Dennison), Deadpool is destined to help save Russell from himself, as well as an assassin from the future who goes by the name Cable (Josh Brolin).

The movie constantly made the audience laugh with sometimes inappropriate remarks. Ryan Reynolds was comical in his lead role as Deadpool which fits his funny personality perfectly, but his supporting cast was also hilarious. Dennison’s portrayal of an obese adolescent with anger issues, who is inappropriate beyond his age is amusing. Many of the other whimsical characters provide laughter, and nobody is funnier than Blind Al (Leslie Uggams), who is like a mother figure to Deadpool but cannot see, and made her first appearance in the original film.

Deadpool 2 is similar to the first movie in that it is a cross between an action-packed superhero film and a comedy. Though some people would argue that the mix between genres is a downfall, I believe that it is a strength of the movie as the comedy is expertly weaved into the plot. In fact, the writers use comedy to poke fun at the traditional notion of a superhero.

To accompany him on his mission, Deadpool recruits his own team of entertaining misfits with superpowers. Though only Domino (Zazie Beetz) has a large role in the movie, each member of the “team” is comical in their own way. Beetz’s power of being lucky seems lame but turns out to be important in Deadpool’s triumph. Her successful role potentially gives her an opportunity to resurface in another film in the future.

Deadpool 2 is filled with violence, murder, profanity, and mature topics such as drugs and sexual references. All of these aspects result in the movie being rated R, which is an appropriate rating, although I do not believe the movie is too inappropriate for most teenagers. Many of the reasons that make the film rated R, likewise, make the movie comical.

Even though the movie’s superhero plot is not extremely creative and in-depth, comedic aspects compensate for the lack of a complex plot. The use of digital effects enhances the experience of the movie, and the unique presentation of the characters makes the film more interesting. Overall, I enjoyed Deadpool 2 as it was entertaining and exciting.