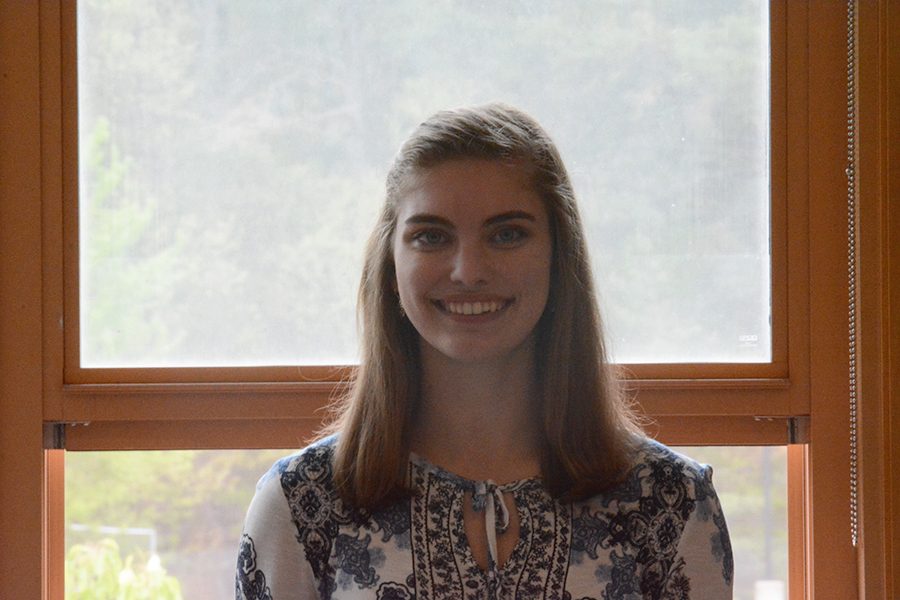 Senior Danielle Sawka has achieved academic feats most students could not even imagine. The title of valedictorian is the final accomplishment of what has been a memorable high school career as well as a testament to her dedication and passion for her studies throughout the years.

In the words of her AP Chemistry teacher, Timothy Knittel: “I’ve got two words that describe her, and that’s ‘the best’.”

Sawka is exuberant about academics; she cannot talk about her love for one subject without overflowing into her passion for everything else. Her transcript features AP courses from all sides of the academic spectrum: Calculus BC, Chemistry, U.S. History, English Literature and Composition, and several more, amounting to a total of ten.

“I love humanities and STEM equally […] I love to think creatively, as well as analytically,” she said.

It is this academic versatility which drew Sawka to choose to attend Brown University this fall. Brown is distinctive among the Ivy League for having an open curriculum, which means that students do not have any requirements outside of those for their majors, and therefore have much more freedom in pursuing a variety of courses.

Sawka was accepted into Brown’s Program in Liberal Medical Education, one of the nation’s most highly-selective combined medical programs, where she will have guaranteed admission into Brown’s Warren Alpert Medical School without having to take the MCAT. This guarantee allows her to relax a little when it comes to building a resume for medical school, and she can expand her horizons outside of her major.

Despite this freedom, her college career will ultimately be focused around chemistry, which she has had a strong interest in since junior year. She credits Knittel for inspiring her passion in the subject with his emphasis on problem-solving skills and lab work; specifically, the class’s final project to identify an unknown substance fascinated her.

Knittel identified Sawka as an outstanding student early in the year, noting in particular her analytical, logical, reasoning, and application skills, as well as her attention to detail and ability to take on multi-step problems with ease. Her lab notebook was extremely detailed and full of observations and calculations far beyond what was required, speaking to her willingness to delve deeply into her studies.

Sawka works hard but rests hard as well; she averages nine to ten hours of sleep a night. As a result, she is more productive during the day, and has developed a lifestyle of intense time management in order to get all her work done and also get to bed on time.

She also manages to stay motivated because of her interest in what she is studying, which makes it much easier to get through schoolwork. According to her, hard work becomes more enjoyable than tedious as long as one becomes involved in it.

“I’d always encourage people to find their passion, find that thing that makes their eyes light up and to just devote their energy to that, and I think that [it] is just truly rewarding to see hard work in an area you love,” she said.

However, Knittel was ultimately the most impressed not by her intelligence or hard work, but by her attitude. He describes her as enthusiastic and “all smiles”, citing an example of her helping others on the aforementioned final project.

“Her kindness and cheerfulness mean more to me, because I don’t see it that often, than her academic achievements,” he said.

Sawka has sought to develop this positive attitude and the ability to communicate over the years, and she believes a strong connection to others is a skill students often undervalue. Her extracurricular activities are centered around this principle; she works as a head coach at Goldfish Swim School, is a swim partner at the Special Olympics, and has tutored for all four years of high school. She anticipates that these skills will carry forward into scientific research in college and beyond.

“I think a lot of people get this stereotype that in laboratory research, you’re not working with anyone, you’re in your white coat just working by yourself with the cells and that’s so not true. My experiences have just shown me how important is to listen to others — their knowledge and advice — [and] using that to solve problems collectively,” Sawka said.

Sawka’s connection to children has also helped her forge her career path; she aspires to be a pediatric physician. This goal has been shaped largely by her work with children and her experience teaching, as she believes both are essential parts of being able to effectively treat children.

The roots of her dream, though, go back to her childhood, when she was inspired by the excellent doctors she had while struggling with health challenges that she wished to keep private.

“I just really want to switch roles and to really help, as best [as] I can, other children,” she said. “I think having that emotional link with those who’ve been sick before is going to be a good asset as a pediatric physician.“

On the way to achieving her career goal, though, she has plenty she is planning to do at Brown.

“There’s just so much freedom and opportunity in college. I’m not going to have enough time and I’m not —  I’d love to do research, join the club swim team, join some other clubs and I realize that it probably won’t be realistic to do everything, but I’m looking forward to at least trying different things out and then, I guess, paring down from there,” Sawka said.

For Sawka, it all comes down to versatility: though she is set in pursuing medicine, her future is far from confined, and it is her excellence across the board that will allow her to keep pursuing her career goals as well as follow her passions in other areas.