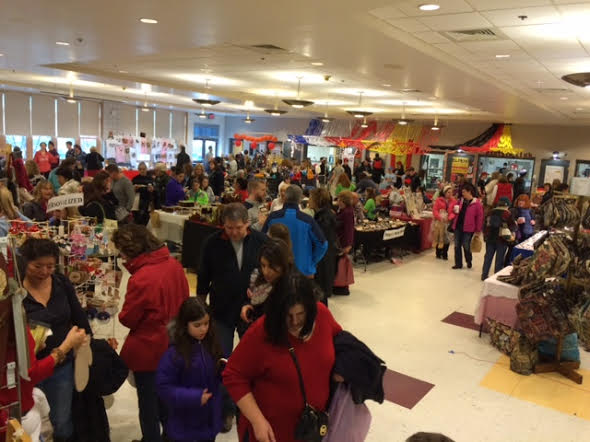 The cafeteria during the Holiday Bazaar

It’s the winter season again; Christmas songs are constantly playing on the radio and in stores, and people have started buying presents in preparation for the big holiday. Along with all the typical holiday events and traditions, was WA’s annual Holiday Bazaar which took place today from 9am to 3 pm.

As usual, vendors sold their wares in the Bell Lobby, cafeteria, along some of the hallways, and the gym. However, compared to previous years, this year’s bazaar was slightly smaller because fewer vendors signed up for the event.

“It was definitely smaller, but I think it turned out great since we had a little more room to spread people out. People weren’t on top of each other, and the vendors told us that helped their sales a lot,” said Student Council Executive Board member Lauren Cullen.

Different vendors included those selling food or wares like handmade jewelry or Christmas tree ornaments. Some clubs from WA that participated in the event to raise money sold items relating to their club, such as Anime Club, which sold anime DVD’s among other handmade anime-related crafts. Others, such as Math Team, sold unrelated food.

Despite the decrease in vendors, the turnout was still quite good, as students, their parents, families, and other people from around Westford and neighboring towns attended the fair. WA clubs and town businesses were supported by the generosity of customers.

“We’re doing really well. We got some very generous donations from parents and families and businesses in Westford, and […] the bids have been very aggressive and we [were] really happy with how the tables [went],” said Senior Class Adviser and English teacher Emily Coates.

Besides vendors and clubs selling wares to support their personal causes, there were a few student-run tables that sold items or asked for donations to support a specific external cause. Examples of this included juniorsElijah Richards, Nate Feehrer and Stephen Wang, who sold bracelets made in Haiti to raise money for the impoverished people living there. There was also fundraiser run by junior Anant Agrawal called Empower the Blind which solicited donations to assist children in India who need money for cataract surgery.

“The bazaar has been a really helpful place, and people have have actually been really generous. It’s surprising how crowded it is; it’s quite a great turnout, and people are selling a lot of interesting things, so it’s really been a great experience. […] I’m really thankful that I was able to be a part of it,” said Agrawal.

Sports at WA, such as cheerleading, also benefited from participating in the bazaar.

“We’ve had a lot of great donations and our spin-to-win has been doing really well too. We’re trying to make it to nationals and we need twelve thousand dollars so hopefully this will take a good amount of it away,” said senior Jessie Wilkinson.

The bazaar was a good opportunity to support WA clubs and sports, as well as local businesses, and was an overall success.

“I would say that the Bazaar was great, after all the hard work that went into it it was incredible to see how it all came together. There were some bumps but student council rolled with the punches and I’m honestly so thankful for the experience of working with all those amazing kids and for running the Holiday Bazaar. I’m proud of how the Bazaar went and I would say it was a success,” said senior Jackie Joncas, a member of the Student Council.