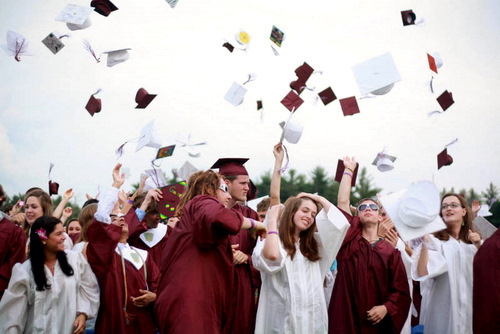 Excited graduates toss their hats into the air in celebration.

By Alexander Lee
Staff Writer
All eyes watch as three balloons, green, yellow and red, sail peacefully into the sky. They were released during the Westford Academy graduation of the class of 2010 to commemorate the life of Olivia Marchand, a WA senior who tragically passed away earlier this year. 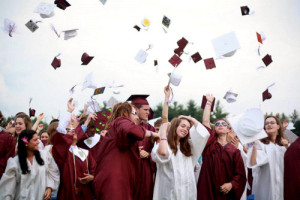 Excited graduates toss their hats into the air in celebration.

Earlier in the day as the start of graduation approached the anxious faces were all but absent. Underclassmen fantasized about one day having graduations of their own while adults reminisced about theirs from many years past.

Yet no one had more anticipation than those of the class of 2010. For them, this ceremony marked an end to eighteen years of dependence, childhood, and high school, but at the same time it represented a beginning to responsibility, adulthood, and the future. 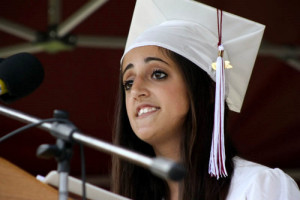 Class of 2010 President, Jen Torto delivers a speech to her fellow classmates.

Thus, while they filed side by side in alphabetical order, as they had done since their elementary days, everyone noticed the natural excitement in their faces, which had been progressively increasing since the first day of their freshman year.

After the tradition of “Pomp and Circumstance” ended, the graduates took their seats and Principal James P. Antonelli commenced his speech. His main theme was honor. He asserted that no matter where the future may take those of the class of 2010, they must all maintain their moral duties.

The next section of the ceremony was the recognition of the valedictorian and salutatorian, Alice Chan and Audrey Tiew. Each of their guidance counselors gave a few praising words to them.

After that, Jennifer Louise Torto, the Class of 2010 speaker, gave her speech. She spoke of the inevitable changes that everyone progressed through while journeying through high school.

Then, Superintendent Everett V. Olsen Jr. congratulated the successes of the graduates and urged them to strive for similar triumphs in the future.

Beach balls flew through the air throughout the graduation ceremony.

Finally, the moment that everyone had been waiting for commenced: the distribution of the diplomas. With Alice Chan leading the pack, the students receive their certificates as their friends and family cheered. Foghorns were not uncommon.

However, in the midst of the excitement, the students, faculty, and guests payed tribute to Marchand. Three balloons were released into the air for her legacy, which had resonated throughout all of the speeches as well.

After the Class of 2010, had officially graduated high school, their class song, “One Love” by Bob Marley, streamed out of their instruments, voices, and most importantly their hearts. In fact, graduate and musician Jon McNamara revised pieces of the song to pay tribute to Marchand.
View Westford Academy Class of 2010 Destinations in a larger map
The final speaker was Class President Cassie Gilling. She encouraged the class to work hard at any venture that each individual may enter into, for the class of 2010 represents the future.

Finally, the hats flew into the air. Their journeys were finally over, yet at the same time they had also ultimately begun.